Days after Apple Inc. (AAPL) said it could not provide guidance for the next quarter, the company raised $8.5 billion through cheap bonds with maturities ranging from three years to 30 years. It will use this money to fund share buybacks and for other general corporate purposes.

Apple is just one of many U.S. investment grade companies issuing bonds during the pandemic to take advantage of cheap borrowing costs. Starbucks' (SBUX) $3 billion proposed new unsecured notes prompted Fitch Ratings to downgrade it to "BBB" from "BBB+" yesterday. Bank of America Global Research counts $807.1 billion in new bond issuances so far this year as of last Friday. Another ten investment-grade companies floated offerings yesterday, according to Bloomberg.

You can thank the Fed for this bond bonanza, and its promise to buy corporate bonds and corporate bond ETFs to bolster the economy. This includes some companies who have seen their debt recently downgraded to "junk" status aka "fallen angels." Fitch estimates debt worth $101 billion toppled into speculative grade territory in the first quarter. 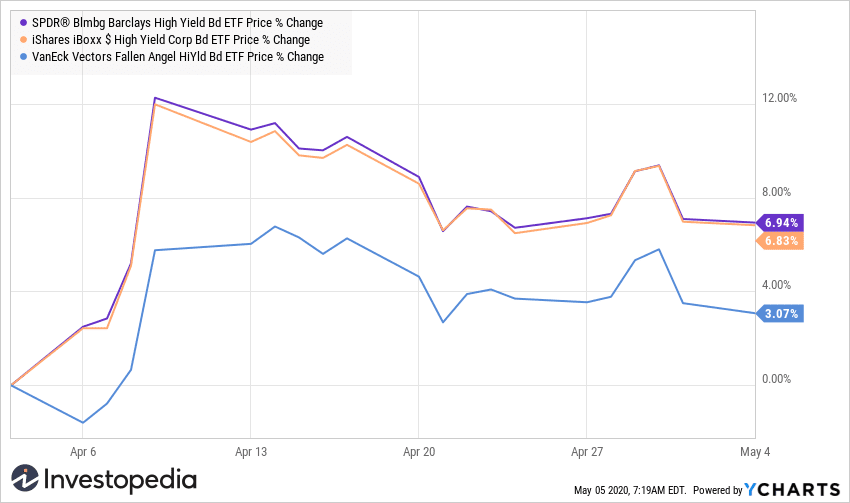 A step like this from the central bank is unprecedented and has drawn criticism. It's been a boon for junk bond ETFs though. The Fed expanded its program to include junk bonds on April 9. The SPDR Bloomberg Barclays High Yield Bond ETF (JNK) saw the second-highest weekly net inflow ever during the week ended April 15, according to Refinitiv Lipper. iShares iBoxx $ High Yield Corporate Bond (HYG) had its fourth-best week for inflows. The high-yield bond ETF universe also gained some support at the end of March when the $2.2 trillion stimulus billed was passed," said Pat Keon, senior research analyst at Refinitiv Lipper, to The Wall Street Journal. The VanEck Vectors Fallen Angel High Yield Bond ETF (ANGL) has climbed almost 20% since March 23.

When, and How, Does the Coronavirus Pandemic End?